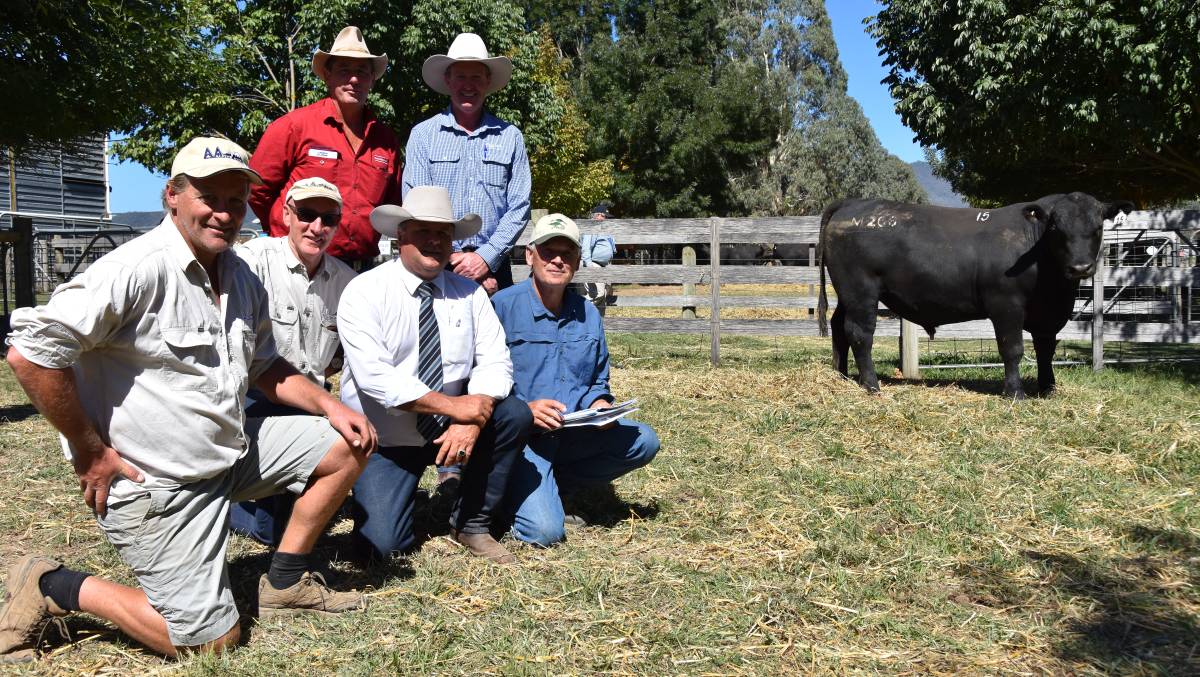 The Rosewhite-based stud offered 93 18-month-old to two year-old bulls, and thanks to the support of 88 registered buyers, sold the lot, to an average price of $6483 – up $1266 on last year’s average.

Mr Hall was a first-time buyer who was coincidentally in the state, and had been recommended Lot 15, which he said was an “outstanding bull”.

“I had the bull recommended to me, but when I arrived I couldn’t find him, so was looking around and found a bull that really stood out, and it turned out that bull was Lot 15 after all,” Mr Hall said.

“I really liked his style. I was looking for a bull to go over cows, not heifers, and he had really good growth figures.”

“I bought a bull from Te Mania Angus a few years ago and this bull had similar qualities, so I’m hoping he’ll keep the herd consistent,” he said.

Mr Hall was hoping to take home two bulls, the second being Lot 80, a full brother of Lot 15, Alpine Elevator M269, but was outbid by Dennis Heywood, Glenlock, Everton.

Mr Hall was returning to buy from Alpine after a six-year hiatus and had also tried to purchase Lot 15, the top-priced bull, but instead went home with the two equal second top-priced lots, 80 and 51, which each made $12,000, as well as one other to average $11,000.

“I liked their type, the bone in them and their softness and their figures were all good too,” Mr Hall said.

“They will be joined to cows in early June, and I’m hoping they will add evenness and type to the herd.”

“There wasn’t a bad bull in the bunch. You could take any of the bulls home and be happy,” Mr Fullgrabe said.

“It was an incredibly strong sale, which was well-deserved after all of their hard work,” Mr Glasser said.

“It was an even lineup of bulls, whose low birth weight to growth spread was fantastic.”

Alpine manager Chris Oswin said he was “ecstatic” with the result of the sale.

“It’s a strong year to sell bulls but we were really thankful for the local support we had, from people who know us and our bulls,” Mr Oswin said.

“The bulls are sound and quiet and we’ve worked to find a balance between numbers and phenotype, and we think we’re doing well with both.”

He said the top-priced bull was a standout to him from the start, which is why they kept one of his full brothers, and semen too.