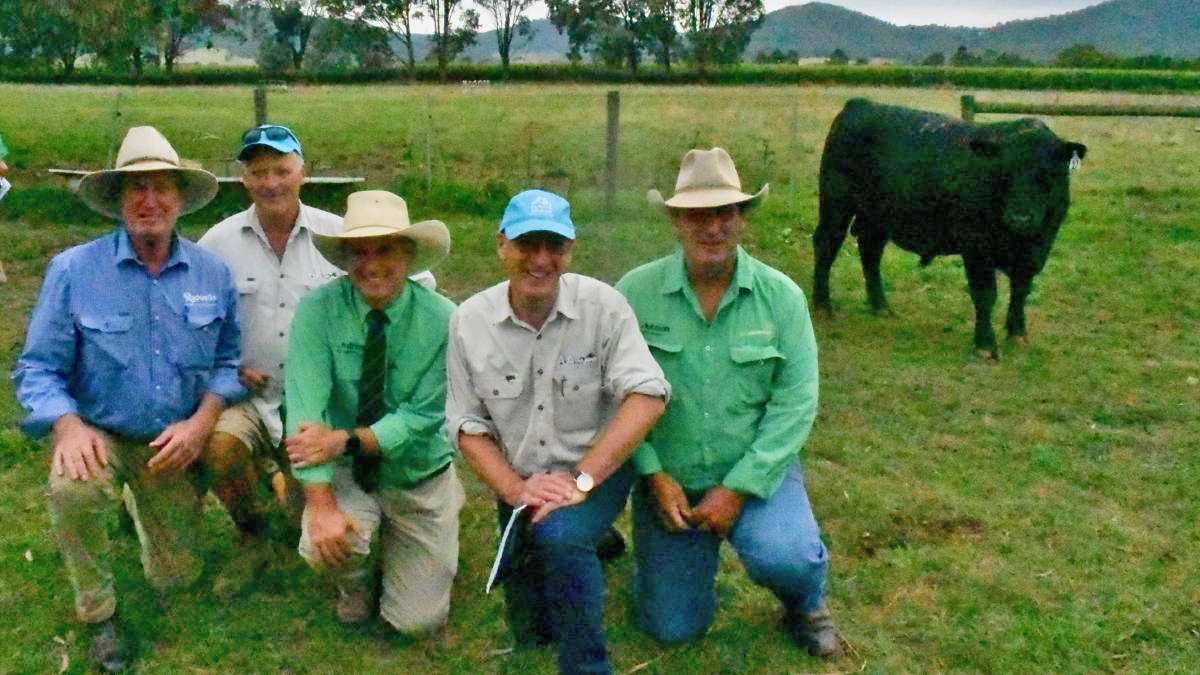 ALPINE Angus sold a bull for a whopping $90,000 at the stud’s bull sale on Wednesday at its Rosewhite sale complex.

The sale set a new top-priced record for the stud, eclipsing last year’s record top price of $75,000 made at its spring bull sale.

The top price was $70,000 more than the top price recorded at least year’s autumn bull sale.

Venturon Livestock’s Harris Thompson said it was rare to find a bull with such a strong phenotypical package.

"We’ve been looking for a top bull for a while now and this one just ticks all the boxes," he said.

It was the first time the operation had bought from Alpine but they were no stranger to buying bulls on the east coast.

"We’ve bought Charolais bulls from Ascot Cattle, Warwick, Qld, we bought from Paringa Charolais in Yea last year, bought an Angus bull from SA, and have bought from NSW too," he said.

"We always try and look for the best bull and it doesn't matter where it comes from."

He hadn’t seen the bull in person but was happy relying on figures, videos and visual appraisals of trusted advisors.

"He’s a bull with so much muscle and power, we’re really excited to see what he’ll do," he said.

He said the bull would be going down to Total Livestock Genetics to have semen collected for NZ and domestic use, and then they would artificially inseminate cows as soon as possible, until the takes up residence on their property in July for an eventual spring joining.

He said he was happy to partner with a "good operator" in Taimate Angus to buy the bull.

Another huge price tag was received later on in the sale when Lot 88, Alpine Next Gen R232, made the third top price of the sale at $40,000.

The bull had the same sire as the top-priced bull and was out of Alpine Lowan M152.

He was purchased by Hardhat Angus, Harden, NSW, whose stud principal Brad Cavanagh described as a bull that "ticked a lot of boxes".

"We really liked the group of progeny by Rennylea N542 and we were looking for a bull that had calving ease, high fertility, excellent carcase data, as well as great structural information," Mr Cavanagh said.

"The bull himself is really athletic and free moving, with a lot of sire appeal."

He said he was focused on a bull with optimum growth figures.

"We’re not looking for extreme growth," he said.

"And most importantly, he’ll combine well with our cow herd."

It was the first time Mr Cavanagh had purchased from Alpine and he said he was very impressed with the operation.

"They have a lot of similar breeding philosophies to what I’m doing in my herd," he said.

He said the plan was to collect semen from the bull as soon as possible and then he would be joined in the paddock in late May.

Alpine stud manager Chris Oswin was "stoked" with the result, saying people clearly weren’t afraid to spend big this year given "everything’s going so well at the moment".

Mr Oswin said he was really grateful for the support from new and return clients, who came from multiple states and regions of Victoria.

He said the stud’s core supporters were mostly family operations.

"I think people just like the consistency of type [of our cattle]; they’re sound and have good birth to growth EBVs," he said.

He said as well as Rennylea N542 being a stand-out sire in this year’s offering, there were some "pretty strong cows behind the top bulls".

He described the top bull as "big-bodied and soft" with "a lot of constitution and thickness".